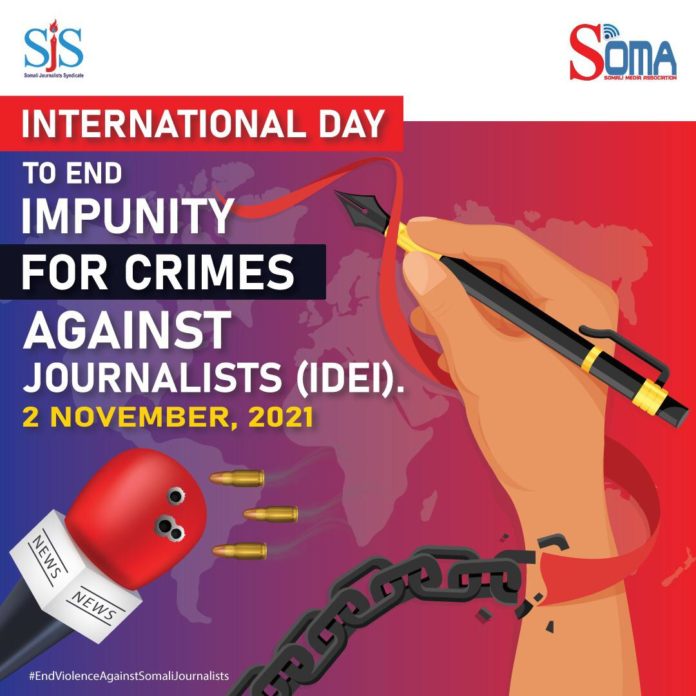 MOGADISHU, Somalia, 2 November, 2021 – Somali Journalists Syndicate (SJS) & its partner, Somali Media Association (SOMA) jointly called for end of the violence against Somali journalists and for accountability for perpetrators of crimes against journalists and media workers, and reminds the international community to play its role to protect media freedom in Somalia.

On the commemoration of the International Day to End Impunity for Crimes against Journalists (IDEI), SJS and SOMA today released its statistics on the number journalists killed in Somalia for the past five years. Since February 2017, 12 journalists were killed in Somalia— three in 2017; four in 2018; two in 2019; two in 2020; and one in 2021— making the country one of the most dangerous places for journalists across the globe. For the seventh year in a row, Somalia has maintained the ignominious world title for impunity towards crimes against journalists as journalists’ killers roam free.

All the slain journalists were practicing their noble profession by covering stories that carry bitter truth which their killers did not want to be revealed.

Among the worst unresolved cases involve a Somali police officer who shot dead a 19-year-old Abdirizak Qasim Iman who was returning from a normal assignment at the SIMAD University in Mogadishu when he shot him on the head resulting Abdirizak’s demise on 26 July, 2018. Today, three years later, Abdirizak’s murder remains unresolved as the killer police officer is yet to be apprehended while, according to government sources, he continues to be on government payroll.

On 1 March 2021, gunmen shot and killed independent journalist Jamal Farah Adan in Puntland-controlled part of Galkayo, Mudug region. Al-Shabaab had claimed the responsibility of the killing. However, a promise by Puntland authorities to investigate and apprehend the perpetrators was not implemented even though media reports of suspects’ arrests.

In September last year, Somalia’s Attorney-General has announced a little-known about appointment of “a special prosecutor” for crimes against journalists and promised to open investigations of journalists killed in the country, which remains to be the highest in Africa. SJS investigations show that no single prosecution related to journalists’ murderers took place since the appointment of this special prosecutor. To the contrary, federal and regional officials have waged their war on journalists and media houses.

Over 60 journalists were arrested from January to October, 2021. Majority of these arrests were arbitrary detentions by the police or the National Intelligence and Security Agency (NISA) that took place in Mogadishu, Puntland, Jubbaland, Galmudug and Somaliland. Three reporters were physically assaulted and injured including gunshots and three others beaten. Five media houses were raided during this period. Dozen others were harassed intimidated and even denied access to information in Mogadishu and in the regional states.

SJS and SOMA remind the international community not to fail its role in the protection of media freedom and journalists’ human rights. The international community cannot be a mere spectator to the grave violations against media freedom and human rights. They must re-measure its accountability mechanisms and ensure that violators must not escape justice.

“Our joint call today aims to commemorate and remember all our slain colleagues while it serves as a strong reminder that getting justice for all fallen journalists depends on the safety of the living journalists. Holding perpetrators accountable would send a strong message to the criminals that they will one day be punished for their crimes against journalists,” Abdalle Ahmed Mumin, the Secretary General of Somali Journalists Syndicate (SJS) said.

“We reminds federal and regional authorities in Somalia of their responsibilities to end the impunity that has thrived in the country and to ensure that victims and their families get proper justice. We want safety. We want protection so that we can continue our journalistic work without fear. Impunity for crimes against journalists must end now,”Mr. Mumin added.

“It’s sad reality that families of our colleagues killed in the line of duty are seeking justice but unfortunately our government does not want to ensure this to happen. We know perpetrators include officials but denying victims to get justice is mire terrible than everything else. We ask Somali government to end the impunity for crimes against journalists. We also demand safety and protection for the media workers,” Mohamed Osman Makaran, the Secretary General of Somali Media Association (SOMA) said.

Mogadishu (Onkod Radio) — USAID has announced that it will provide $1.5 for the Somali children's education programs as the drought had forced thousands...
Read more

New York (Onkod Radio) — New York: The world is lurching from crisis to crisis, trapped in a cycle of firefighting and unable to...
Read more