On IDUAI 2021, SJS and SOMA call for media, journalists’ access to information amid increased pressure against media freedom 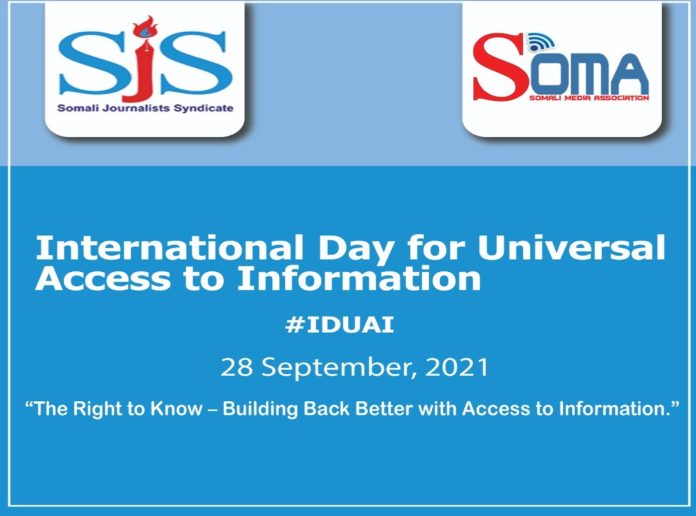 MOGADISHU, Somalia 28 September 2021 – On International Day for Universal Access to Information (IDUAI), today the Somali Journalists Syndicate (SJS) and the Somali Media Association (SOMA) call on the right of access to information for journalists, the right to know and report independently and without restrictions.

Today IDUAI is celebrated around the world while journalists and media stations in Somalia are facing extreme threats. Access to information is critical for enabling citizens to exercise their voice, to effectively monitor and hold their government to account. When media and journalists are able to receive and report about public interest information, it will help citizens decide about issues that affect their lives. However, the Somali federal authorities and its regional states continue to restrict journalists and media access to information, detain and threaten reporters across the country.

On 25 September, Somali Police and officers from the National Intelligence and Security Agency (NISA) blocked journalists covering a suicide car bombing at a security checkpoint at El-Gabta junction, Mogadishu. According to the affected journalists, security forces mounted a roadblock near the blast scene and refused journalists to film the blast site.

On 24 September, Jubbaland switched off local telecommunication networks in Kismayo after a bomb injured a government-allied youth leader and his son. The mobile telecom companies and internet service providers were forced to switch off their networks from Thursday afternoon 23 September – Friday morning 24 September undermining safety and media access to information.

On 18 September, Hirshabelle State Parliament Speaker, Abdihakim Luqman Mohamed had publicly ordered security forces to “switch off live TV coverage” during the Federal Parliament’s Upper House elections in Jowhar. The Speaker’s announcement, which was not implemented, came following a brawl inside the parliament that led to the suspension of the 18 September voting.

On 15 September, Somali military officers accompanied by local militia men in Abbay Dhahan area on the outskirts of Mogadishu, attacked and beaten two Goobjoog Media Group journalists – Mohamed Ahmed Roraye and Sharma’arke Abdinur Wehliye – who were on assignment to cover the burial of victims killed in a suicide explosion in Mogadishu the day before. The officers and the unidentified gunmen stopped a vehicle in which journalists and others were travelling and singled out the journalists before attacking, beating and threatened to kill them.

SJS and SOMA remind authorities at both federal and regional states level to realise that denying journalists’ access to information, attacking them, blockage of media coverage and shutting down telecommunications is a human rights violation.

“It is essential that Somali authorities to understand and respect the right to information, freedom of expression and press freedom as a constitutional right and also a universal right. These rights must not be violated,” Abdalle Ahmed Mumin, the Secretary General of Somali Journalists Syndicate (SJS) said. “On the commemoration of IDUAI, we condemn these latest incidents which indicate how access to information had become hard for journalists amid the parliamentary elections in the country.”

“As we celebrate the International Day for Universal Access to Information (IDUAI), I take this opportunity to remind the federal government and the federal member states that they have responsibility to protect the media and its professionals by bringing those who commit press violations to courts,” Mohamed Makaraan, the Secretary General of Somali Media Association (SOMA) said. “Media and journalists should not be targeted for only informing the public. This culture of impunity must stop.”

Mogadishu (Onkod Radio) – Somali Journalists Syndicate (SJS) and the Somali Media Association (SOMA) strongly condemn the travesty of trial and the one year and four...
Read more
News in English