The three-day training was supported by the National Endowment for Democracy (NED). It aims to increase journalists’ understanding of human rights reporting and to enable them to collect evidences, document and report incidents of human rights violations and advocate for accountability. Through this initiative, SJS has established a network of 150 human rights journalists across Somalia.

At his closing remarks, SJS Secretary General, Abdalle Ahmed Mumin, has mentioned that the training initiative attempts to fill in the gap left by the limited resources for local media and the shortage of professional trainings for journalists which has made the media less focused on human rights events in Somalia.

“We have arrived in Galmudug to train journalists on human rights reporting. The region is now facing a number of critical issues including the impact of the drought that has affected the lives of the people in this region, including the internally displaced communities due to the armed conflict and those already affected by the climate change. Meanwhile, on other front, the formation of local district councils has just started with the low participation of women. These are the issues the local media needs to address, ” SJS Secretary-General, Abdalle Ahmed Mumin said.

Mr. Mumin urged the journalists to apply topics covered in the training, including utilization of the Somali Constitution, international frameworks and the principles of human rights when when documenting and reporting human rights abuses in the region.

Galmudug Minister of Information, Culture and Tourism, Ahmed Shire Falagle, who attended the opening of the training, underlined the inter-connection of the protection of human rights and peace-building in order to create trust within the community. He called on journalists to avail their advocacy reporting to provide humanitarian assistance to the drought-affected communities in Galmudug. He also appealed SJS to provide more training to local journalists in the remote locations of Galmudug.

“The current drought has severely affected people and animals. I hope this training will lead journalists to draw international attention to the humanitarian crisis in the country and in Galmudug and to provide a quick response to the vulnerable communities. I also urge journalists to respect the ethics of the media and show greater responsibility when conducting journalistic reporting,” Minister Falagle said.

The Director of Radio Adado, Sharma’arke Mohamed Mohamud, who is among the participants, indicated the training was the first of its kind for Galmudug journalists and called for more professional training for journalists.

“We really appreciate the roe of SJS and its decision to train journalists in Galmudug, especially in Adado. As we know human rights issues are underreported in the country because of the lack of prioritising for our newsrooms. That is why such training on human rights is of course important topic for us,” Sharmarke added.

Sabiriin Hassan Mohamed of Bulsho TV and Radio Adado highlighted the need to enhance the role of female journalists in terms of their right to receive training and support in acquiring skills to enhance their careers.

“Many women journalists who work in the local media drop or quit the profession and the reason is the high level disappointment they face from their day-to-day duties. Their role is not appreciated and they can not work independently from the male domination as they do not have equipment such as cameras and computers,” Sabiriin concluded.

At the end of the training, an official representative of the Adado District Administration, Abdirahman Moalim Abdullahi joined SJS Secretary-General to officially award certificates to the participants. 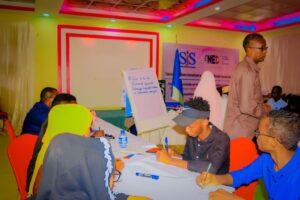 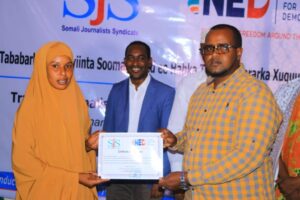 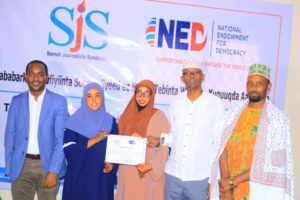 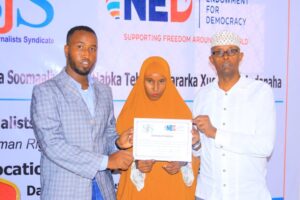 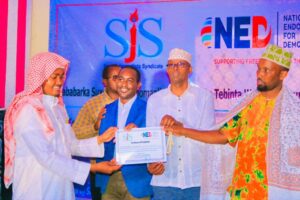 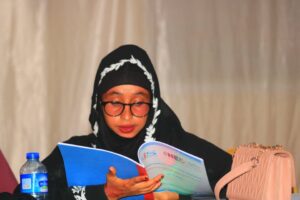 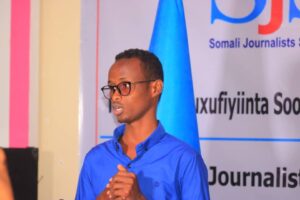 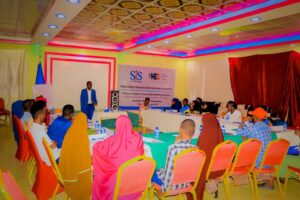 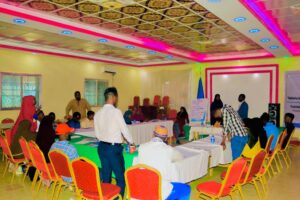 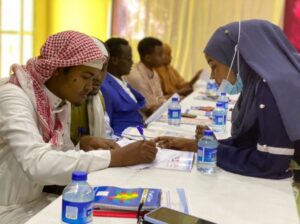 SMSJ: Attacks against Somali journalists and media and impunity for these crimes must end